Virtually all tech companies have expressed caution on their respective earnings calls. And why not? The macroeconomic environment is full of uncertainties and there’s no upside to providing aggressive guidance when sellers punish even the slightest miss.

Moreover, the spending data confirms the market is softening across the board, so it’s becoming expected that chief financial officers will guide cautiously. But companies facing execution challenges can’t hide behind the macro. Which is why it’s important to understand which firms are best positioned to maintain momentum through the headwinds and come out the other side stronger.

In this Breaking Analysis, we’ll do three things: 1) Share a high-level view of the spending squeeze almost all sectors are experiencing; 2) Highlight some of those companies that continue to show notably strong momentum – and relative high spending velocity on their platforms – albeit less robust than last year; and 3) give you a peek at how one senior technology leader in the financial sector sees the competitive dynamics among Amazon Web Services Inc., Snowflake Inc. and Databricks Inc.

This is why it’s called “Bearons” 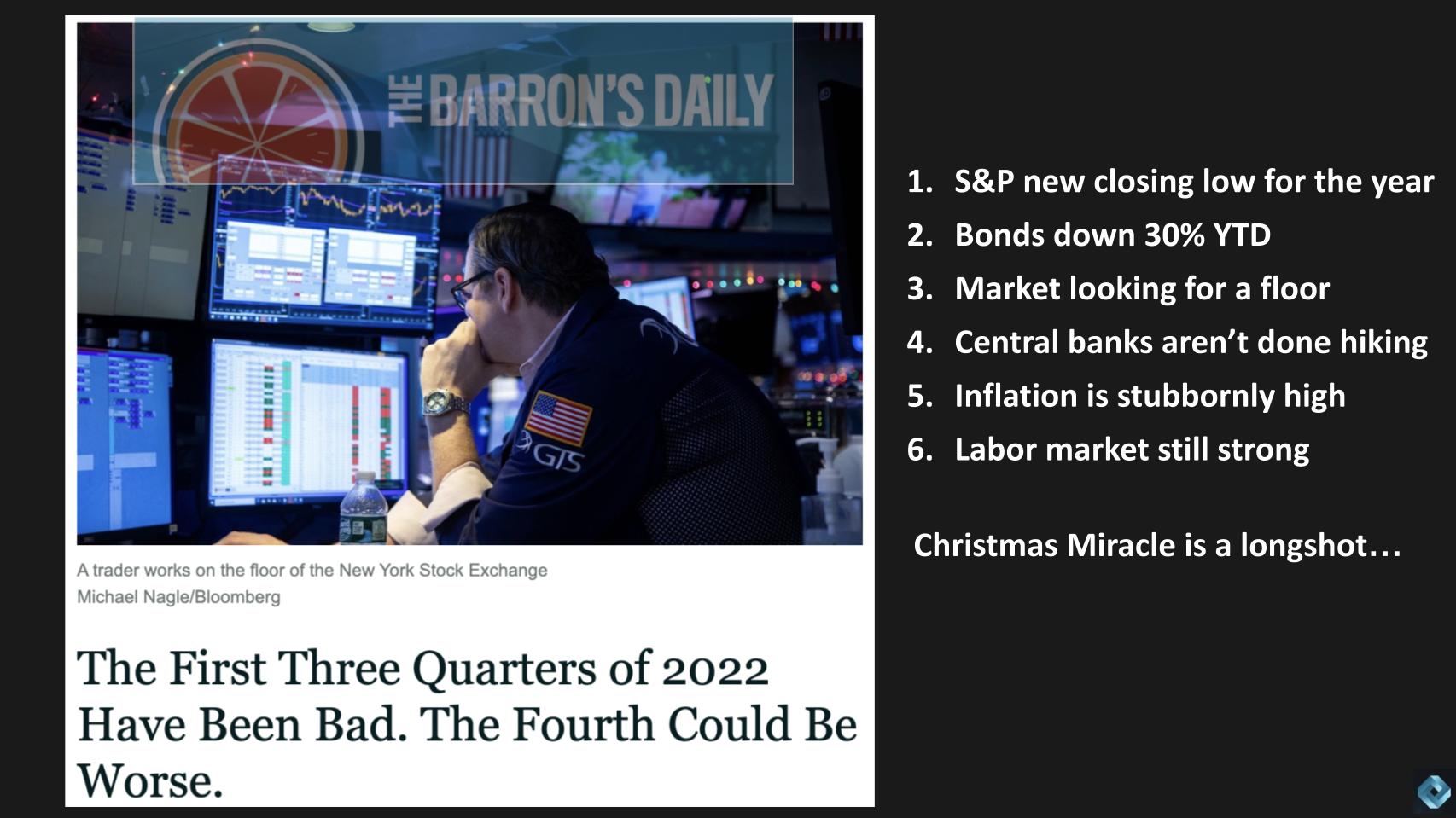 Friday morning’s Barron’s Daily told us how bad things are and why they could get worse. The S&P Thursday hit a new closing low for the year. Bonds, normally the safe haven, are sucking wind. The market hasn’t seemed to find a floor. Central banks are raising rates, inflation is still high but the job market remains strong. Not to mention that U.S. debt service is headed toward $1 trillion per year and the geopolitical situation is pretty tense. And Europe is a mess.

So the Santa Claus rally is looking pretty precarious. Especially if there’s a liquidity crunch coming.

The Big Four are now the Big Two

Last week we showed you this graphic ahead of the UiPath event. 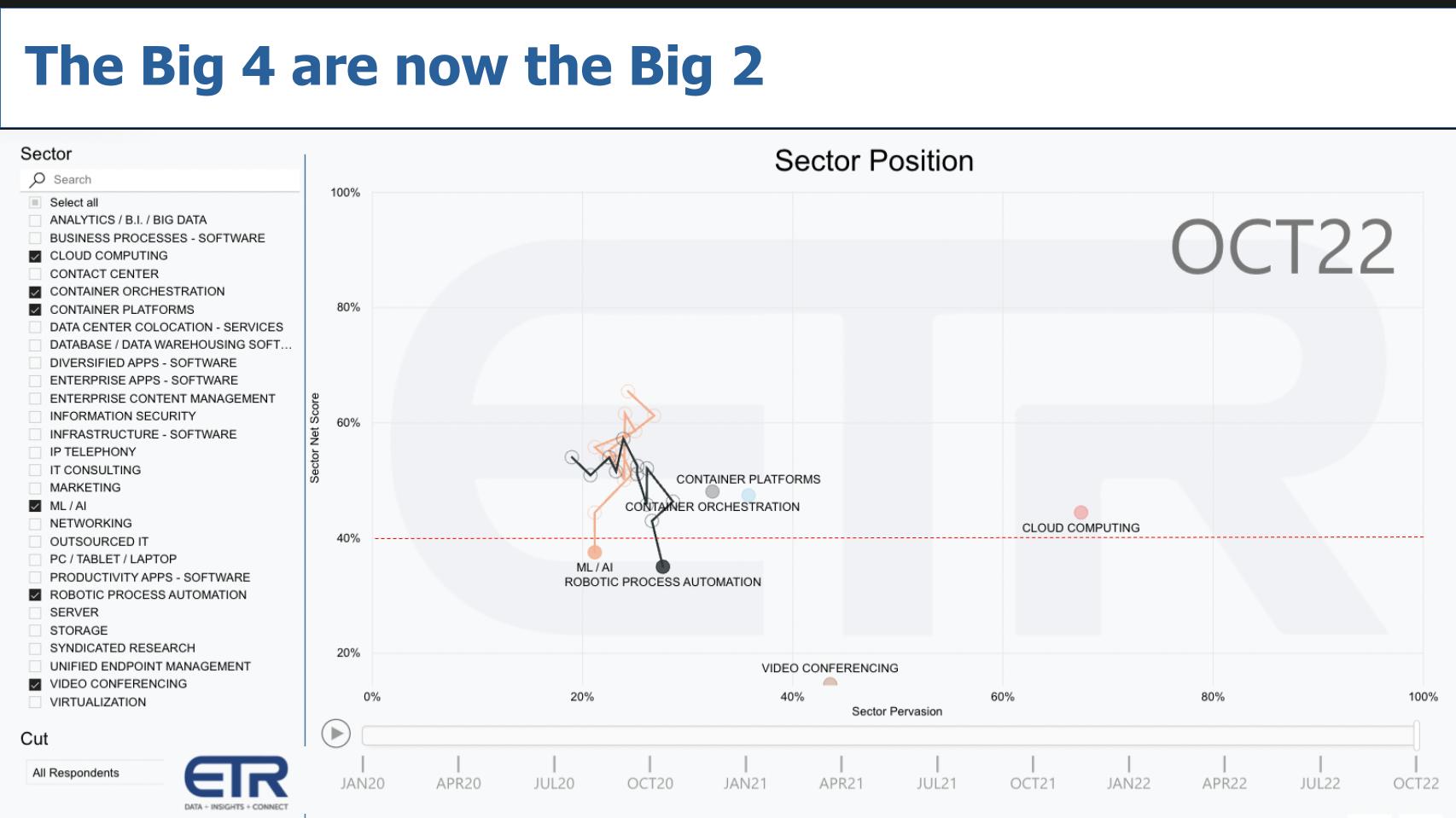 For months, the Big Four sectors, cloud, containers, artificial intelligence and robotic process automation have shown spending momentum above the rest. The chart above shows Net Score or spending velocity on specific sectors. These four have consistently performed each quarter above the 40% mark – for at least 10 quarters in a row. Until this latest ETR survey. ML/AI and RPA have decelerated, as shown by the squiggly lines, and our premise was they are more discretionary than other sectors.

The Big Four is now the Big Two – cloud and containers.

A receding tide lowers all boats 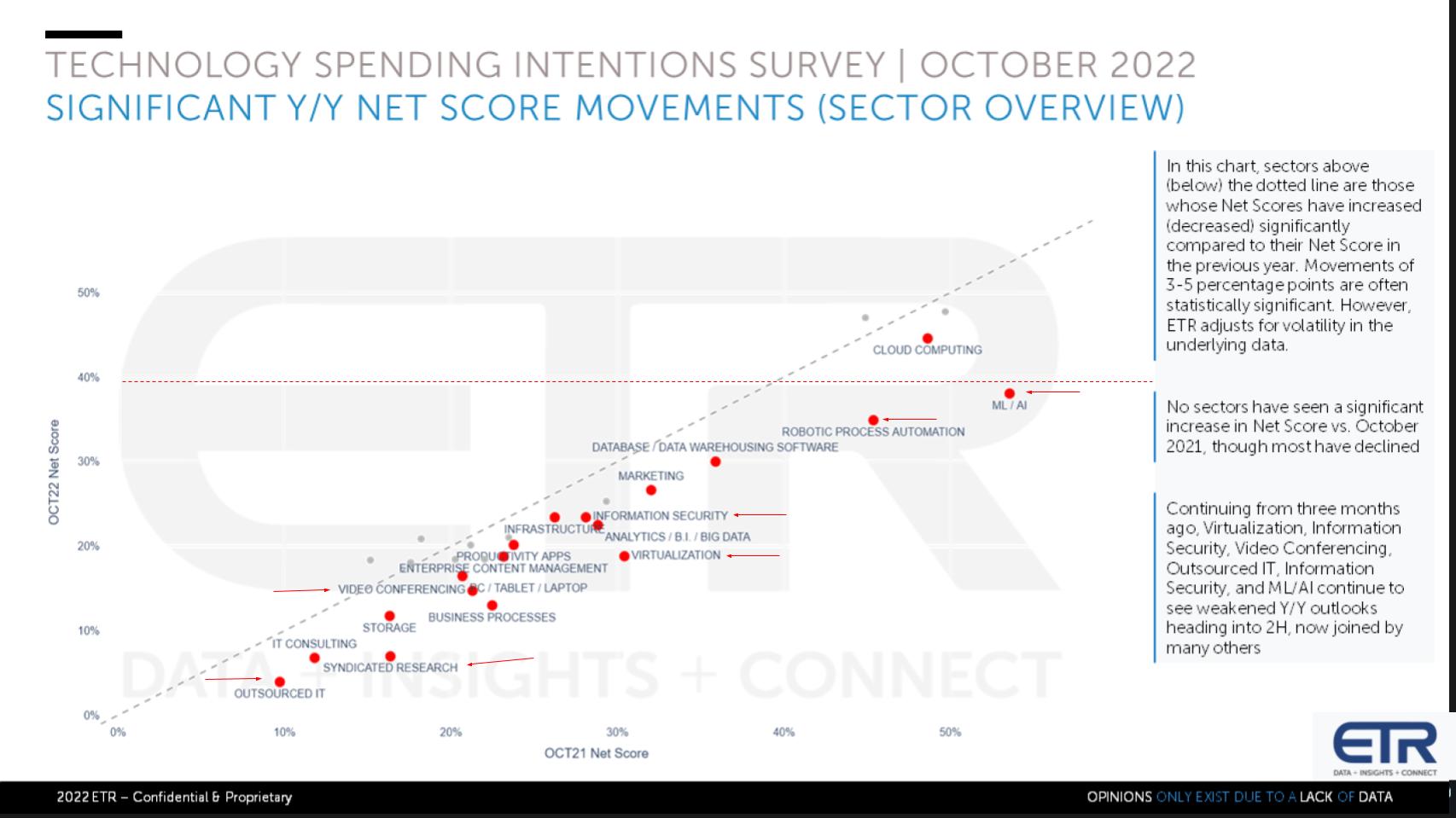 But the reality is almost every sector in the ETR taxonomy is down, as shown above. The chart displays in red dots the sectors that have decreased in a meaningful way. Almost all sectors are now below the trend line and only cloud and containers (as we showed earlier) are above the magic 40% mark. (Container platforms and container orchestration are the gray dots.) And no sector has shown a significant increase in spending velocity relative to October 2021.

In addition to ML/AI and RPA, information security, virtualization, videoconferencing, outsourced IT and syndicated research stand out as ones that have declined at a higher rate in the survey. One could make the assumption that these are more discretionary. The outlier is security. We would argue that security is less discretionary but you’re seeing a share shift as we’ve previously reported – toward modern platforms and away from point tools where legacy spending is being consolidated at a rapid rate.

The point is there’s no sector that is immune from the macro environment. Remember, as we reported last week, we’re still expecting 4% to 6% information technology spending growth this year relative to 2022.

It’s a dynamic environment and of course that could change in either direction.

Which players are still performing well?

Below we take a look at some of the key names to investigate how they’re doing on a relative basis. 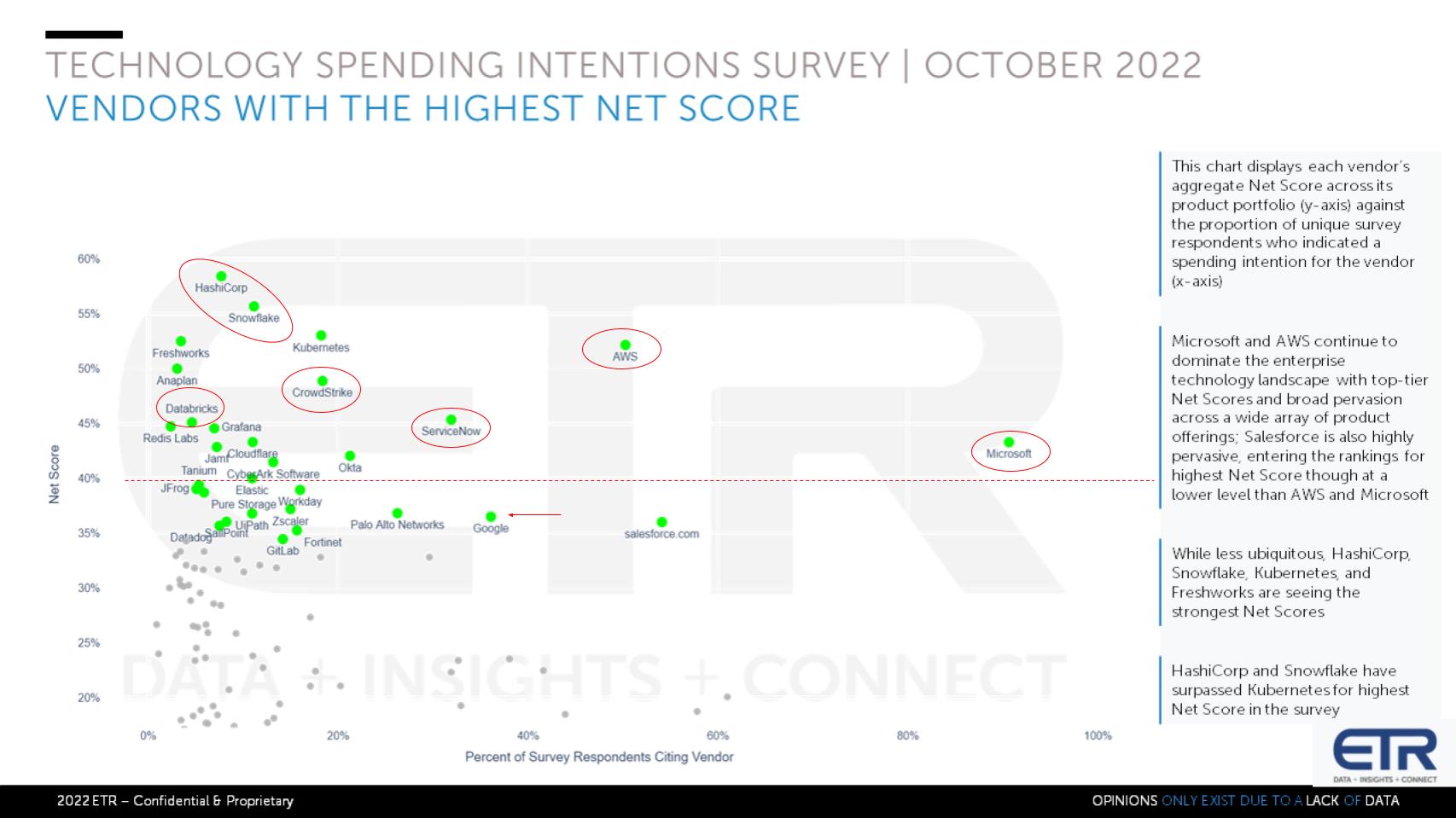 This chart above shows the Net Score or spending momentum on the Y axis and the pervasiveness of the vendor within the ETR survey – measured as the percentage of respondents (N1,000) citing the vendor is in use.

As usual, Microsoft Corp. and AWS standout because they are both pervasive and elevated. For two companies of this size to demonstrate and maintain Net Scores above the 40% mark is impressive. AWS is showing a noticeably higher Net Score on the vertical scale, which we reported in our video is a new trend, as normally we see Microsoft dominating on both dimensions. Upon further investigation, however, we realized that this is not a break from the trend. Rather we normally compare AWS with Azure, where Azure in the survey has consistently shown higher spending velocity than AWS and that remains the case today.

Salesforce Inc. is impressive owing to its overall size and financial execution but below Microsoft and AWS on the vertical axis.

What about Google Cloud?

Google is meaningfully large, but relative to the other big public clouds, we see its position as somewhat disappointing. Sarbjeet Johal posted on Twitter that John Blackledge of Cowen went on CNBC this week and said that GCP by his estimates are 75% of Google Cloud’s revenue and is now only five years behind AWS and Azure.

Our models differ. Google Cloud Platform by our estimates is running at about $3 billion per quarter, or more like 60% of Google’s reported overall cloud revenue. You have to go back to 2016 to find AWS running at that level. And 2018 for Azure. So we’d estimate that GCP is six years behind AWS and four years behind Azure from a revenue performance standpoint. Now, techwise you can make a stronger case for Google, but revenue is a strong metric in our view and four to six years is a long time in cloud.

We circle ServiceNow Inc. above because the company has become or is on its way to being generational. And impressively, it remains above the 40% line. We were at CrowdStrike Holdings Inc.’s conference with theCUBE two weeks ago and saw firsthand what we see as another generational company in the making. And you can see above that CrowStrike’s spending momentum is impressive.

Hashicorp and Snowflake have now surpassed Kubernetes to claim the top Net Score metric. (We know Kubernetes isn’t a company, but ETR tracks it as though it were just for context.) And we’ve highlighted Databricks as well…showing momentum, but it doesn’t have the market presence of Snowflake.

But again, these names are virtually all off their recent highs of 2021 and early 2022.

Speaking of AWS, Snowflake and Databricks…

Our colleague Erik Bradley recently held an in-depth interview with a senior executive at a large financial institution to dig into the analytics space. And there were some interesting takeaways that we’d like to share. The first shown below is a discussion about whether or not AWS can usurp Snowflake as the top dog in analytics. 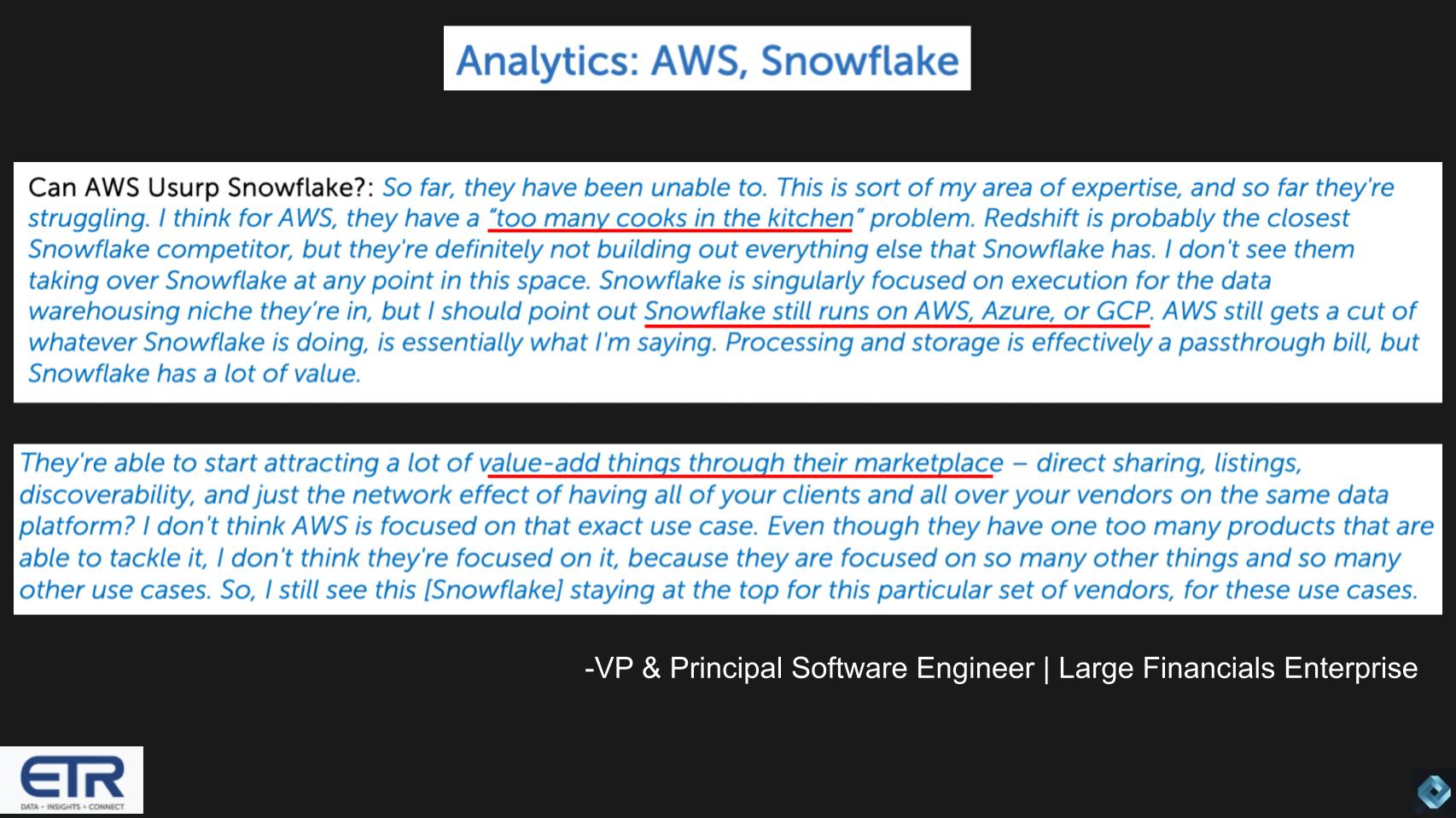 This individual’s take was interesting. Note the comment, “This is my area of expertise.” We can attest that this practitioner has deep experience with numerous data platforms. And while it’s only an N of 1, the commentary is useful and we believe reflects an accurate picture of the overall market.

This person cited AWS’ numerous databases as problematic, but Redshift was cited as the closest competitor to Snowflake. This individual also called out Snowflake’s current cross-cloud advantage (supercloud) as well as the value-add in its marketplace as a differentiator.

But the real point this person was actually making is that cloud vendors make a lot of money from Snowflake. AWS, for example, sees Snowflake as much more partner than competitor and as we’ve reported. Snowflake drives a lot of compute and storage revenue for AWS. In fact, we believe Snowflake has rapidly become one of AWS’ largest, fastest-growing and most important customers and partners.

Now, as well, this doesn’t mean AWS doesn’t have a strong marketplace – it does, the best in the business. But the point is Snowflake’s is exclusively focused on a data marketplace and the company’s challenge and opportunity is to build that up, continue to add partners and create network effects that create a long-term sustainable moat for the company. — while at the same time staying ahead of the competition.

Snowflake’s differentiators from a practitioner’s-eye view

The other commentary that caught our attention was a discussion about Snowflake’s unique capabilities. 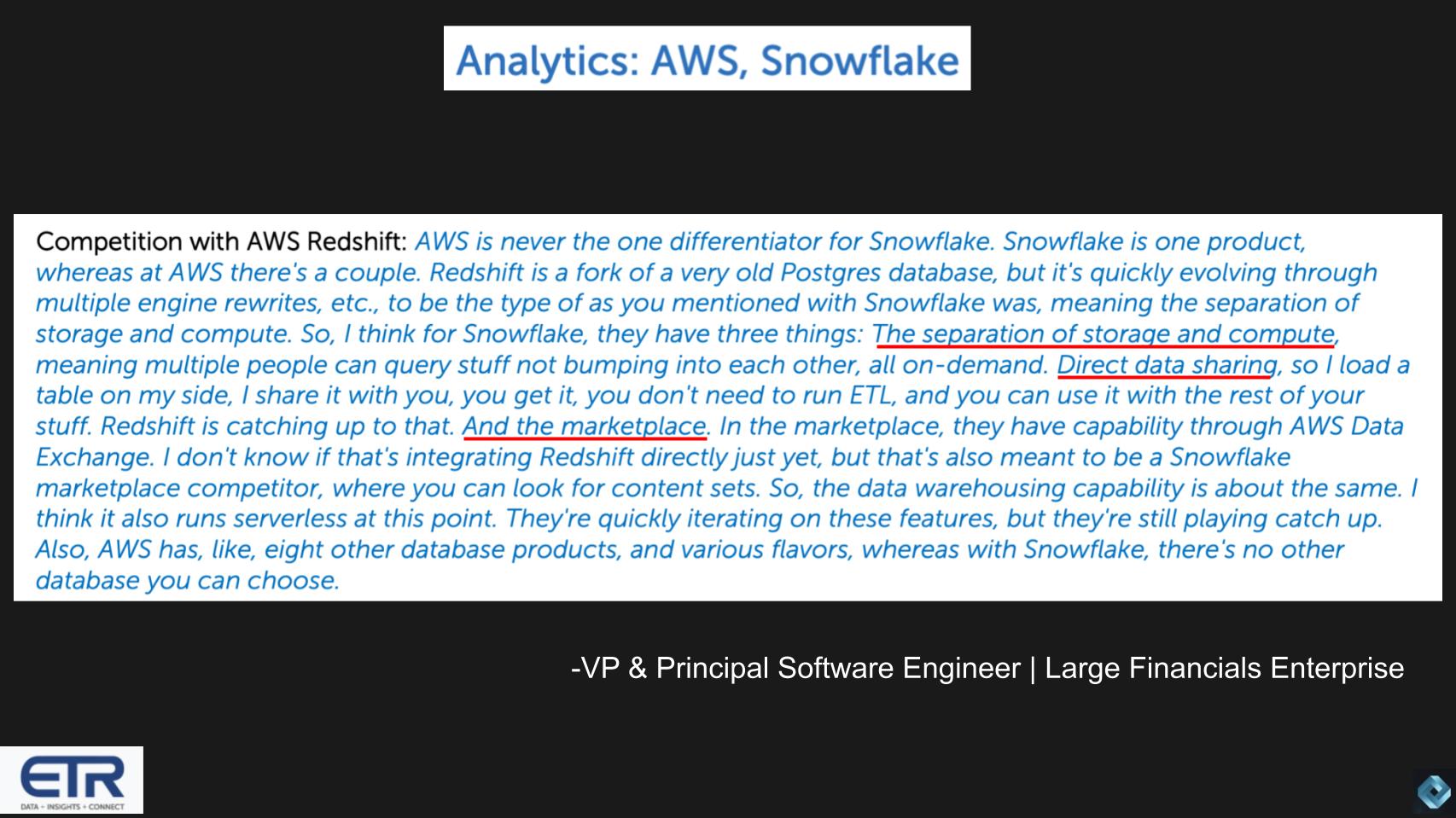 This individual cited three areas: 1) The separation of compute and storage – which AWS has replicated, sort of – not as elegant in the sense that you can reduce the compute load with Redshift, but unlike with Snowflake you can’t shut it down; 2) Snowflake’s data sharing capability and 3) Snowflake’s marketplace… again a key opportunity for Snowflake to build out its ecosystem, close feature gaps and importantly, create governed and secure data sharing experiences for anyone on its Data Cloud.

Now the last thing this individual addressed is how Databricks and Snowflake are attacking a similar problem – i.e. simplifying data, data sharing and getting more value from data – but skinning the cat, so to speak, in different ways. 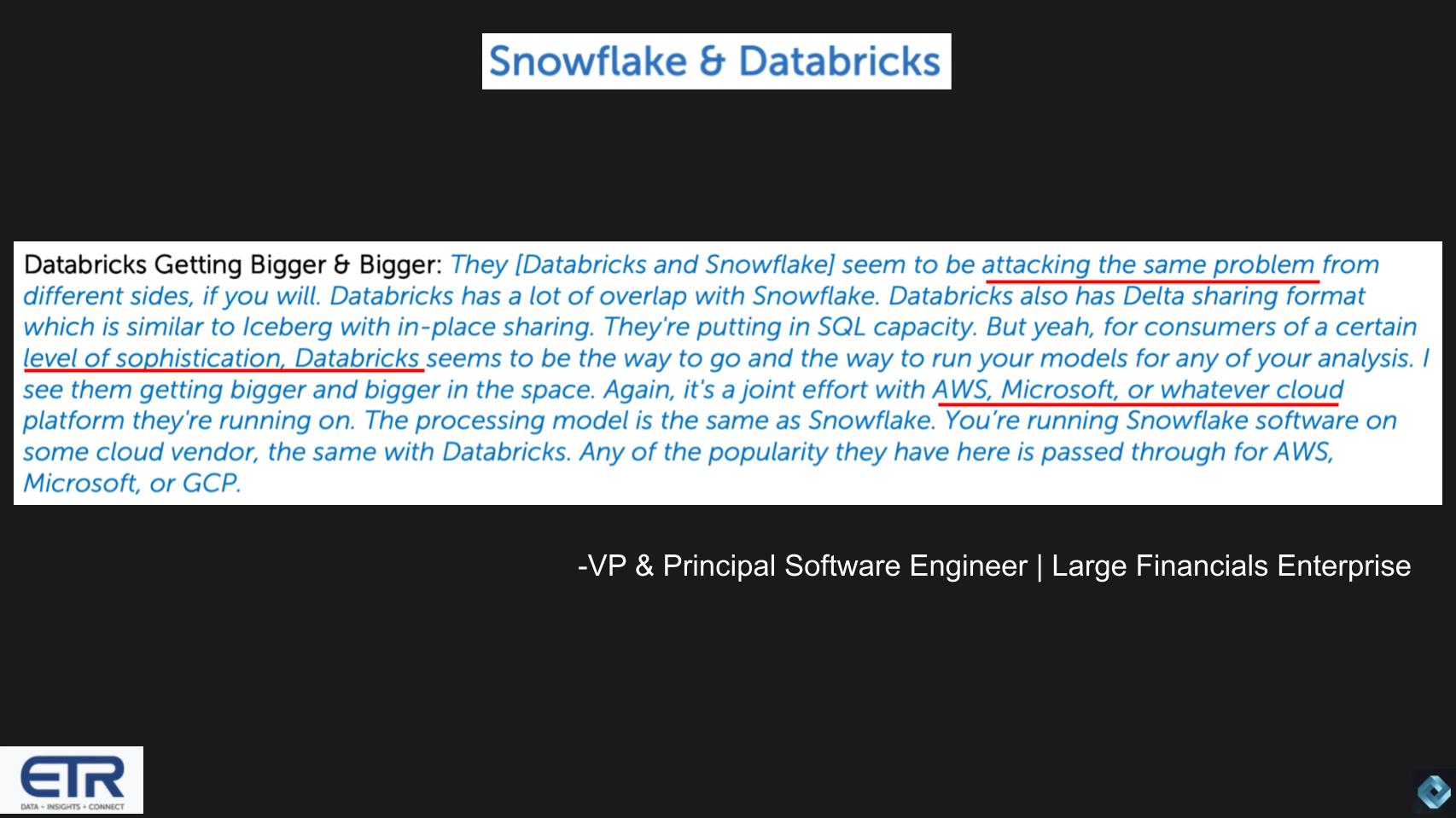 The key messages here are there’s overlap with these two platforms but Databricks appeals to a more techie crowd – you open a notebook when you’re working with Databricks and more likely to be part of a data science team. With Snowflake you’re likely  to be coming at the problem from a traditional data analytics perspective and more aligned with the line of business, often with an industry emphasis.

Note the similarities in terms of cross-cloud or supercloud designs.

Like many others, we’ve often discussed Snowflake versus Databricks – how can you not as an independent observer? It’s an interesting topic with a bit of drama thanks to vendor marketing, benchmarketing and counter-punching. Snowflake is moving into the data science arena from its data warehouse strength and Databricks is moving into analytics and the world of SQL from its AI/ML position of strength. Both companies are doing well – although Snowflake was able to get to the public markets and Databricks has not.

[Note: Because of red-eyes and hurricanes, the analyst takes didn’t make it into this week’s video.]

We’ve had many conversations with former Gartner lead data analyst and friend of theCUBE, Sanjeev Mohan on this topic. We would summarize his thoughts on the appeal of Databricks and Snowflake as follows:

Databricks appeals to users that are not only data…

Read More: As the tech tide recedes, all sectors feel the pinch – SiliconANGLE

A G.O.P. Test in Michigan: Is Trump a Help or a Hindrance?

Grim Finance targeted by ‘advanced’ hack; losses of over $30…