At the end of 2019, state and local governments leased 22.6 million square feet (sf) of privately owned, corporate-grade office space in the US, according to data by JLL US Office Research, cited by Bisnow. But thanks to the shift to the hybrid model, combining office and working-from-home, governments are reducing their office footprint. And by the end of 2021, the total amount of privately owned office space that state and local governments leased dropped by nearly 10%.

And this is just the beginning. JLL estimates that over time state and local governments could shrink their office footprints in leased privately owned buildings by 25% or 30%.

The government of California already gotten rid of 767,000 sf of office space, for an annual savings of $22 million, and over the next three years will try to dump 20% of its leased office space, for $85 million in savings, California Department of General Services Deputy Director Monica Hassan told Bisnow.

In San Francisco, 26% of the total office space was on the market for lease at the end of Q4, a catastrophically high rate, and up from the single digits in 2018, and only slightly less catastrophic than Houston (31%) and Dallas Fort Worth (28%), according to Savills.

Last year, Fort Worth, Texas, purchased the 425,000-sf office tower that had been the headquarters of Pier 1 imports which filed for bankruptcy in 2020 and was liquidated. The City paid $69.5 million for the building and figured that it would have to spend $30 million on renovations to turn it into its new City Hall.

The tower will then consolidate 16 departments that are spread over nine city-owned buildings. “We’re going to empty them and sell them for the most part,” Fort Worth Director of Property Management Steve Cooke told Bisnow. “To sit here and say that it’s going to save us 30 million bucks, I can’t do that sitting here right now,” Cooke said. “But it certainly helps.”

The Georgia State Properties Commission works state agencies that occupy 12 million sf of office space, half or which is in privately owned buildings leased from landlords. Lee Nelson, GSPC’s leasing manager and assistant director of space management, told Bisnow: “It seems like just about all of [the agencies] are in some stage of figuring out the proper way for us to be organizing our in-office experience going forward.”

Many agencies have budgetary motivations to reduce leased space, he said. The Georgia Department of Education has decided to reduce its office footprint at its 150,000 sf state-owned headquarters in Downtown Atlanta by more than half, with part of the staff working from home or in remote counties. “We’ll find a state entity to backfill it,” Nelson said. And so the vacant space would ripple through the sector.

In Nebraska, 18 of 80 state agencies, with 13,000 employees, still use working from home or hybrid work arrangements. “We surprised ourselves with our own capability to leverage this [situation],” Nebraska Department of Administrative Services Director Jason Jackson, told Bisnow.

“The savings are real,” he said. “I think future administrations are going to be hard-pressed to say, ‘We should be spending more on office space.’”

In terms of office workers returning to the office: The numbers are still dismal. Currently, the number of workers who enter office buildings is still down by 60% from February 2020, ranging from -70% in the epicenter of working-from-home, San Francisco, to -42% in Austin, based on data from Kastle, which provides entry systems for commercial buildings. 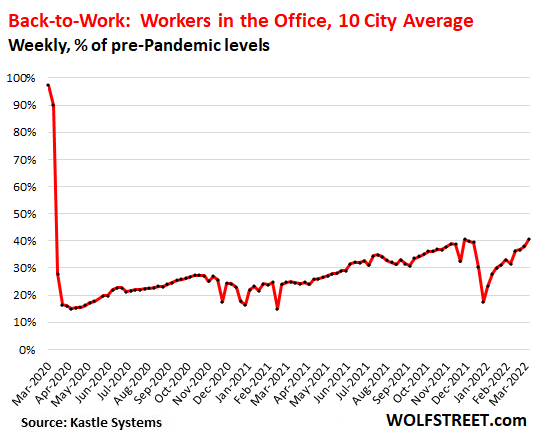 A year ago, a JLL survey found that 87% of state governments were rethinking their real estate strategies, and 40% said this would likely result in a reduction in office space, while the other governments were unsure what impact this rethink would have on their footprint, according to JLL’s Hunt during a November webinar, cited by Bisnow.

This is the latest shoe to drop in the already struggling office market dotted with huge numbers of empty or nearly empty office towers. In many major markets, the amount of vacant office now on the market for lease has exploded.

Older vacant office towers can be bought for cents on the dollar in the foreclosure sales that are now cropping up. For example, in Houston’s Energy Corridor, a 420,000 square-foot Class A office tower that was completed in 1983 and renovated in 2005, and was “valued” at $121 million in 2014, was sold in a foreclosure sale for $20.6 million. Read… What are Vacant Office Towers Worth? Foreclosure Sales Show How Values of 1980s Office Towers in Houston Have Collapsed, Dishing out Huge Losses for CMBS

Enjoy reading WOLF STREET and want to support it? Using ad blockers – I totally get why – but want to support the site? You can donate. I appreciate it immensely. Click on the beer and iced-tea mug to find out how:

Would you like to be notified via email when WOLF STREET publishes a new article? Sign up here.

Lowes Stock Is On The Rise After Earnings, Despite Housing Market Dip

Here’s When the Bitcoin and Crypto Bear Market Will End, According to deVere Group…

Housing markets across the globe hit by rising rates

The Global Personalized Gifts Market is expected to grow by $13011.27 million during

Spotify launches audiobooks to more English-speaking markets outside the U.S.

Reunion Gold extends the Oko West deposit with the deepest…