Victory was supposed to be swift. Instead, the invasion began badly. The Russians massively underestimated resistance and soon found their positions and supply lines harried by an elusive opponent.

But in the end, after months of grinding warfare, Russia won the “winter war” against Finland in 1940 — an attritional campaign that analysts warned could be a template for how the war in Ukraine ends.

The outcome is still far from certain more than three weeks after Russia launched its campaign, said a growing number of western defence officials. While Ukrainian successes have stalled Russia’s advance, US and UK military chiefs have been largely silent on Kyiv’s military problems.

It is a major question that dogs assessments of the battle for Ukraine, given the dearth of information surrounding Ukraine’s own rate of attrition.

In addition, although Russia’s military has fared poorly its forces are regrouping and there is little sign that President Vladimir Putin is scaling back his strategic objectives.

“The winter war is a very interesting analogy. The Russians did badly but they secured a very favourable peace by their ability to counter-escalate and sustain attrition,” said Sidharth Kaushal, a military analyst at the UK’s Royal United Services Institute think-tank.

He added: “We have to remember that there are some pretty significant challenges the Ukrainians face.”

As Thierry Burkhard, France’s chief of the defence staff, warned in an interview in Le Monde this month, Russia’s forces may yet “steamroller” Ukrainian resistance.

Kyiv says it has lost 1,300 troops compared with an estimated 7,000 killed, wounded or imprisoned for Russia, according to US estimates. But western officials and analysts said the Ukrainian losses were likely far higher: most agreed that an equivalent loss rate to Russia was plausible, equating to about 10 per cent of Ukraine’s troops.

Hundreds of Ukrainian tanks and vehicles have also been destroyed, said one Nato official. “I can tell you that western arms supplies to Ukraine are absolutely critical at this point,” he said. “Without them I think we’d be in a very different place, notwithstanding the incredible heroism from the Ukrainians.”

Even the current level of supply may be insufficient.

“Senior [Ukrainian] officials have told me that supplies of anti-tank and anti-aircraft weapons have slowed to a trickle and stocks are running low,” said Paul Grod, head of the Ukrainian World Congress, a non-governmental organisation. “This needs to be addressed as soon as possible — otherwise Ukrainian fighters will be confronting Russian tanks with just machine guns.”

Ukraine’s information dominance has masked its losses: thousands of open-source images of exploded Russian armour have been taken by Ukrainian civilians, who are unlikely to post similar pictures of their own side’s losses. This has led to a natural bias in the online content being scrutinised by many analysts.

Russian troops, meanwhile, have had their mobile phones confiscated by commanders — a lesson from its covert invasion of Crimea in 2014, and intended to give Russia greater control over information. Instead, it left a vacuum that was filled by Ukrainian content.

Moscow is also hamstrung by its domestic need to maintain the fiction that the war is a limited “special operation”, meaning it cannot pump out images of Ukrainian losses on television that might indicate otherwise.

The Kremlin has nevertheless repeatedly insisted its operations are going to plan. “I have seen no evidence that its overall intent has changed,” said one western defence official.

In the south, Russia has had some success. Heavy Ukrainian losses were sustained as Russian forces over-ran positions defending the land bridge from Crimea. On flat, open terrain Russian battle groups have also been able to deploy and advance more easily. At least one brigade of Ukrainian marines — the 36th naval infantry brigade — is trapped defending the besieged city of Mariupol.

For Russian forces in the east and the north — where logistical problems have been most acute, because supplies come from depots in Belarus via narrow, vulnerable roads, not rail — there are signs of regrouping.

This has been aided by increased use of drones in the past week, according to one western military official. Dozens are flying over Ukraine and being used to hit targets and provide intelligence, surveillance and reconnaissance capabilities to Russian battle groups.

Nor is there any sign that Russia is scaling back its plans, despite supply problems. 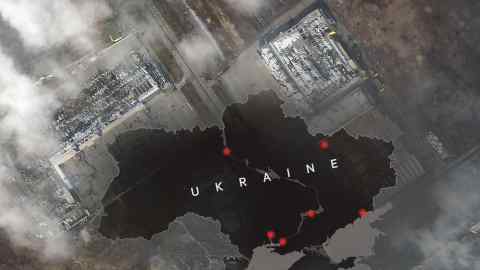 “They have not determined that they need to move to a defensive position, which is the first thing they would do if they are truly worried about supplies,” said Kusti Salm, permanent secretary at Estonian defence’s ministry. “Until that happens, the Russian meat grinder will keep grinding.”

Moscow is also seeking to replenish its forces with troops from Russia’s east and foreign fighters. On April 1, the current draft of conscripts end service and they may face pressure to sign up as regulars, which would allow for their continued deployment.

“By mid-April we could see the resumption of large-scale Russian military operations,” said Gustav Gressel, an analyst of Russia’s military at the European Council on Foreign Relations think-tank. “Of course Putin has to think carefully about domestic opinion, but in theory this is a force of 100,000 or so he can draw on.”

Perhaps Ukraine’s biggest tactical vulnerability is its Joint Forces Operation (JFO), where the bulk of Ukraine’s military assets are deployed just west of Donetsk and Luhansk. Russia is seeking to encircle the Ukrainian troops, western officials said, cutting them off from Kyiv and drawing them into open combined-arms combat which plays to its battle groups’ superiority.

Crushing Ukraine’s forces in such a way would be as much of a victory as capturing Kyiv, some analysts said, invoking Carl von Clausewitz, the military theorist who saw the destruction of armies rather than the capture of cities as the fastest route to victory.

Regardless, few believe the fight in Ukraine will end soon.

“Even under the best case assumptions, this will be a war with many operational pauses,” said Rusi’s Kaushal. “A war of fits and starts that will probably drag on for a long time.”

The Markets Rebound, Backing The Fed (Technically Speaking For The Week Of 3/14-3/18)

Dar set to take charge as finance minister on Tuesday

TAKE THE SURVEY: City of Sharon economic and business…