Federal Reserve officials voted Wednesday to lift interest rates and penciled in six more increases by year’s end, the most aggressive pace in more than 15 years, in an escalating effort to slow inflation that is running at its highest levels in four decades.

The Fed will raise its benchmark federal-funds rate by a quarter percentage point to a range between 0.25% and 0.5%, the first rate increase since 2018.

Officials signaled they expect to lift the rate to nearly 2% by the end of this year—slightly higher than the level that prevailed before the pandemic hit the U.S. economy two years ago, when they slashed rates to near zero. Their median projections show the rate rising to around 2.75% by the end of 2023, which would be the highest since 2008.

The Fed’s postmeeting statement hinted at rising concern about inflation that initially appeared last year to be driven by pandemic-related bottlenecks but has since broadened.

“As I looked around the table at today’s meeting, I saw a committee that’s acutely aware of the need to return the economy to price stability and determined to use our tools to do exactly that,” said Fed Chairman

at a news conference on Wednesday that followed the Fed’s first fully in-person meeting in two years.

Mr. Powell signaled greater concern that higher inflation might persist due to a hot job market with record job openings and wages up at their fastest pace in years. “That’s a very, very tight labor market—tight to an unhealthy level, I would say,” he said.

The rate-setting Federal Open Market Committee approved the rate increase on a 8-to-1 vote, with St. Louis Fed President

dissenting in favor of a larger half-percentage-point increase.

Mr. Powell said that the Fed could finalize a plan to shrink its $9 trillion asset portfolio at its next meeting, May 3-4, and to implement it shortly afterward. The central bank ended a long-running asset-purchase stimulus program last week.

New projections show officials expect to raise rates at a much faster pace than they projected in December, when most penciled in three quarter-percentage-point rate increases for this year, and considerably quicker compared with a series of nine interest-rate increases between 2015 and 2018. It would be closer to the 2004-2006 period, when the Fed raised rates 17 times in succession. 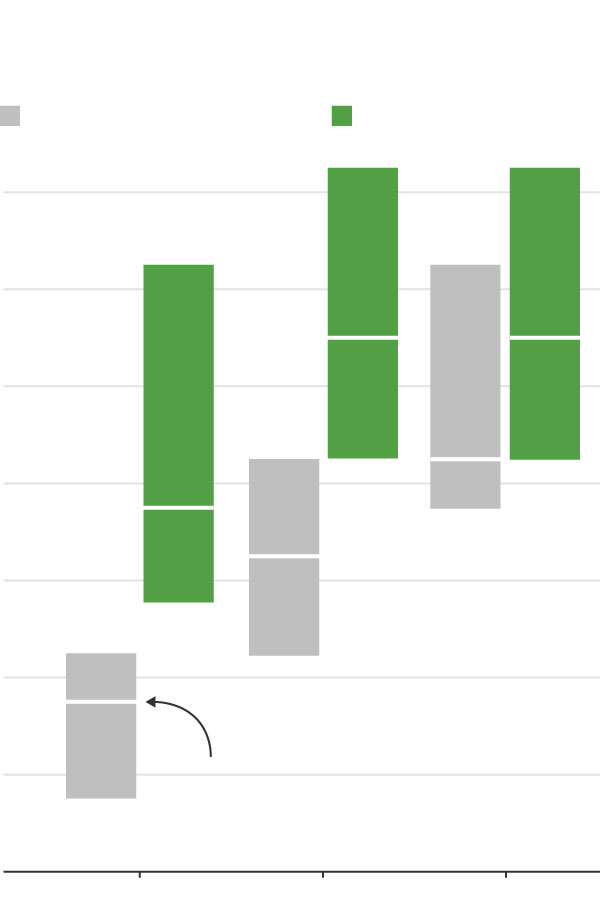 At the same time, most Fed officials indicated they didn’t anticipate a need to raise interest rates above 3% over the next few years. “The rhetoric is ‘do-whatever-it-takes,’ but the forecast is ‘hope-for-the-best,’” said

chief economist at Dreyfus and Mellon.

How much other interest rates rise will depend on how investors, businesses, and households respond.

The Fed’s decision Wednesday marked a sharp reversal from just two years ago, when it lowered rates to near zero and launched a suite of programs to steady markets and support the economy as Covid-19 shut down large swaths of the economy. The pandemic triggered a severe two-month recession in 2020 and record job losses.

Since then, economic output has recovered amid massive federal stimulus and vaccinations, and inflation surged one year ago. The recent episode has been a far cry from the seven years of near-zero interest rates the Fed maintained after the 2008 financial crisis.

Inflation rose 6.1% in January from a year earlier, according to the Fed’s preferred gauge. Core inflation, which includes food and energy, rose 5.2%. Most officials now see core inflation ending the year at 4.1%, up from their forecast of 2.7% in December. They see interest-rate increases bringing inflation down further, to 2.6% at the end of 2023 and to 2.3% the year after.

Even before Russia’s invasion of Ukraine three weeks ago, Fed officials had turned uneasy at the prospect inflation might not diminish as rapidly as they had been expecting a few months ago. U.S. labor markets have tightened rapidly, with the unemployment rate falling to 3.8% in February and annual wage growth running at near its highest pace in years.

Now, officials are facing the prospect of even higher inflation due to escalating sanctions by the West against Moscow, which risk higher energy and commodity prices, together with new pandemic lockdowns in China that further roil battered global supply chains.

Mr. Powell continued to lay the groundwork Wednesday for the possibility of raising rates by a half percentage point later this year, rather than in all quarter-point increments. Seven officials projected the Fed would need to raise rates above 2% this year, a level that would require at least one of their moves this year to be a half-percentage-point increase, which the Fed hasn’t done since 2000.

In the weeks leading up to Wednesday’s meeting, Mr. Bullard, who favored the bigger rate increase, had said the Fed needed to raise rates faster or “risk squandering policy credibility.” Due to the Fed’s policies that limit communications before and after policy meetings, Mr. Bullard isn’t likely to comment publicly on his dissent before Friday.

“They played it safe,” said Johan Grahn, who oversees exchange-traded funds at Allianz Investment Management in Minneapolis and who had advocated a half-point hike. “To get their credibility back, they will need to do something bolder.

Economists say there’s a growing risk that Mr. Powell could feel pressure to lift rates to levels that tip the economy into recession. That would especially be the case if policy makers conclude that consumers’ and businesses’ expectations of future inflation are rising or if officials see growing evidence of a wage-price spiral in which workers coping with climbing prices demand more pay increases, leading businesses to continue raising prices.

Fed officials face three important questions as they consider their next moves. First, how quickly do they need to raise rates to an estimated “neutral” level that neither speeds nor slows growth? Second, has that neutral level increased as rising inflation sends down real, or inflation-adjusted, borrowing costs? And third, if and when will the Fed need to raise rates above neutral to deliberately slow growth?

What actions should the Fed take to address inflation? Join the conversation below.

Wednesday’s projections show Fed officials thought they might need to raise the fed-funds rate slightly above a neutral level this year or next. Most officials estimate that is between 2% and 3% when underlying inflation—stripped of idiosyncratic influences such as from supply shocks—is at the Fed’s 2% target.

But the projections also showed officials believed they could raise rates without pushing up unemployment. “The numbers don’t add up,” said

chief economist at Grant Thornton. “It’s a bit fanciful to think that you can slow inflation without raising the unemployment rate.”

The central bank has been telegraphing its shift toward raising rates several times this year, and already, mortgages and other borrowing have grown more expensive. The average 30-year fixed-rate home loan climbed above 4.25% last week, according to the Mortgage Bankers Association, an increase of nearly a full percentage point since late last year, and lenders say rates have climbed even higher in recent days.

“They’ve done an inspired job of jawboning. The Fed clearly encouraged rates to go up before they even raised rates,…

Charts suggest the Nasdaq 100 and S&P 500 could be days away from bottoming, Jim Cramer

Is the UK now a buy? Analysts weigh in after market meltdown and Bank of England

Many D.C.-area businesses closed during the pandemic. Even…