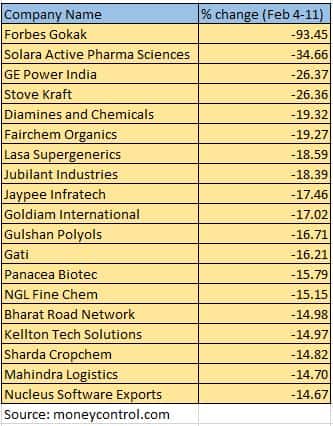 “Domestic equities swung between gains and losses in this week’s volatile session driven by aggressive FII selling, RBI policy meeting, US inflation data and the upcoming state elections. Though the investors expected the RBI to moderate its policy tone, the central bank surprised the market with a super dovish statement by maintaining its accommodative stance, modest inflation forecast and GDP growth of 7.8% in FY23,” said Vinod Nair, head of research at Geojit Financial Services.

“However, US inflation surged 7.5% on an annual basis with the consumer price index for all items rising 0.6% in January, fuelling fears of a hawkish rate hike by the central bank. Net purchases by the DIIs is pumping slight optimism into the market which is countered by heavy FII selling.

“The direction of the market in the week ahead will be determined by cues from global markets while domestic macroeconomic data and corporate earnings will continue to remain in focus in the near term,” he added.

“D-Street experienced wild swings and ended the week in red as the participants baked in the possibility of a faster than expected Fed rate hike given the soaring US inflation. Globally, markets have been remained turbulent since the start of the year and this volatility was extended to this week as well,” said Yesha Shah, head of equity research, Samco Securities.

Domestic markets have been closely following global movements with Nifty consolidating within the narrow range of 17,200-17,600 for the last couple of days. With the earning season ending on 15 Feb, the focus will shift back to global cues. Volatility is expected to remain elevated in the near term with record high inflation and the US Fed board meeting scheduled on Monday. Interest rate sensitives, metals and select pharma stocks are likely to remain in focus next week.

The Nifty took support near 17050 but failed to sustain above the 20 day simple moving average (SMA) which is broadly negative. Technically, the index is witnessing non-directional activity near the 50 day SMA. However, on daily and weekly charts, it is holding higher bottom formation but at the same is consistently facing resistance at 20 day SMA. Hence, the market is likely to maintain non directional activity in the near future.

Squash Equipment Market to Record a CAGR of 2.14%, Introduction of Various National…

The prostate cancer therapy market will soar. Here are the companies that could…

Is Robinhood Markets Stock a Buy Now? | The Motley Fool

HRT: inside the complex global supply chain behind a $20bn market

Ford shares rise 11% after news of production increase for…