2 Unstoppable Stocks to Buy and Hold Forever | The Motley Fool


Taking a buy-and-hold approach to investing typically comes with fewer headaches as the market’s short-term volatility is less of an issue, not to mention the fact that it provides tax advantages. But this strategy is only as good as the securities that investors pick.

Choosing poor businesses to invest in and hold onto for a while will not yield excellent (or even average) returns. With that as a backdrop, let’s look at two stocks that are worth holding for a long time: Novo Nordisk (NYSE:NVO) and Microsoft (NASDAQ:MSFT).

These companies have been around a while, are leaders in their respective industries, and boast competitive advantages that should help them perform well for many years to come. 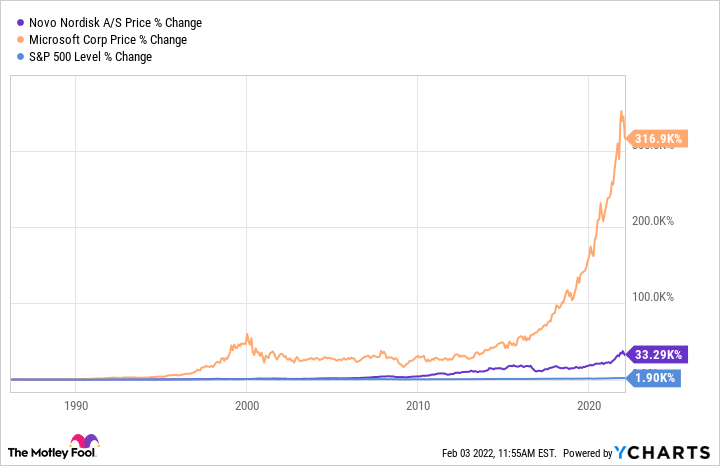 Denmark-based Novo Nordisk has been a leader in the market for diabetes medicines for a few decades, and it continues to make headway in this area. Like other drugmakers, its therapies benefit from patents that help protect them from generic competition and confer pricing power. Diabetes is a severe health condition that’s projected to continue becoming more prevalent.

As of November 2021, Novo Nordisk held a 30.1% share of the diabetes care market, up slightly from the 29.3% slice it held a year earlier. To break things down further, the pharma giant was one of the leaders in the market for glucagon-like peptide 1 (GLP-1, a type of medicine that helps patients with type 2 diabetes produce the optimal amount of insulin) with a 52.7% market share as of November 2021, up from 50.4% a year earlier. 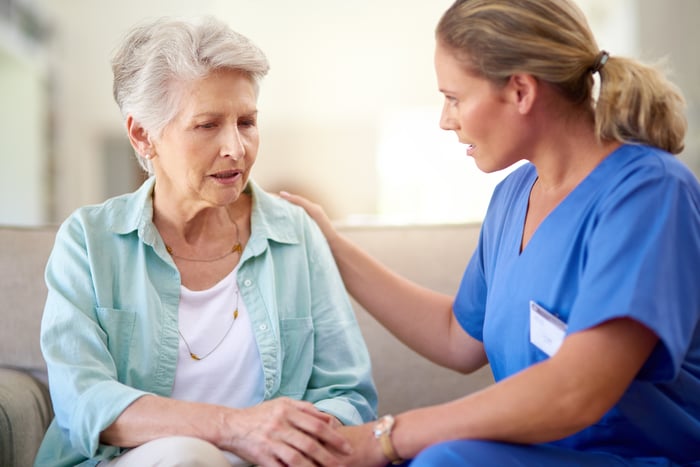 Similarly, Novo Nordisk’s insulin and obesity medicine units are market leaders. Perhaps the company’s most promising diabetes products are Ozempic and Wegovy. The former grew its sales by 59% in 2021 to 33.7 billion Danish kroner (or roughly $5.2 billion).

Moreover, the future looks bright. According to some estimates, annual sales of Ozempic will clock in at $9.7 billion by 2026, making it one of the 10 bestselling drugs in the world. Wegovy was only approved in the U.S. last year and experienced a highly successful launch, according to management.

Besides these medicines, Novo Nordisk boasts a rich pipeline with more than two dozen ongoing programs, including Icodec, a potential once-weekly insulin product for patients with type 2 diabetes that could be a big deal.

Novo Nordisk will likely continue to innovate and remain one of the leading companies in the diabetes care market for many years to come. This is why it is worth holding on to shares of this healthcare stock for a while.

This tech behemoth has been a leader in computer operating systems for years. And its productivity tools, marketed to both businesses and individuals, are nearly everywhere. Millions of people and companies worldwide rely on various applications the company offers — Excel, PowerPoint, Teams, and more — in their day-to-day activities, and jumping ship is often not a simple thing to do.

While Microsoft arguably made its name via its computer operating system business, it has also been making significant headway within the cloud computing industry over the past five years or so. The company’s Azure service held a 20% share of the cloud computing market as of the first quarter of 2021. Such services allow businesses to increase their productivity and decrease costs. These benefits explain why the sector is on an unstoppable growth path. According to some estimates, it will expand at a compound annual rate of 19.1% through 2028. 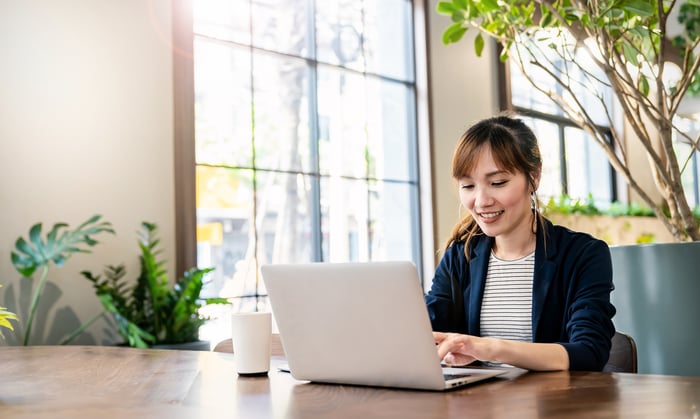 Naturally, Microsoft is competing with other prominent players in cloud computing, including Amazon and Alphabet. But even with stiff competition, there is room for multiple winners in the long run. For Microsoft’s latest quarter (ended Dec. 31), its cloud unit saw sales increase 25.5% year over year to $18.3 billion. This segment was the largest in terms of revenue for the company, accounting for 35.4% of total revenue. Meanwhile, total revenue came in at $51.7 billion, 20% higher than the year-ago period while net income grew 21% year over year to $18.8 billion.

Azure and the rest of Microsoft’s cloud computing segment will continue to be key growth drivers. It is also a leader in gaming, a position it could strengthen given its recent announcement that it will acquire Activision Blizzard in an all-cash transaction valued at $68.7 billion.

Microsoft’s overall business looks robust and more than capable of growth in the years to come, and that’s why it is an excellent buy-and-hold stock to add to your portfolio.

This article represents the opinion of the writer, who may disagree with the “official” recommendation position of a Motley Fool premium advisory service. We’re motley! Questioning an investing thesis — even one of our own — helps us all think critically about investing and make decisions that help us become smarter, happier, and richer.

Moroccan boy trapped in well has died, according to state media

Why every Costco product is called ‘Kirkland Signature’

The Future of Real Estate

Stock market slumps deepens as the Dow turns into a bear

The SoftBank Experiment Has Failed. Here’s What Comes Next.