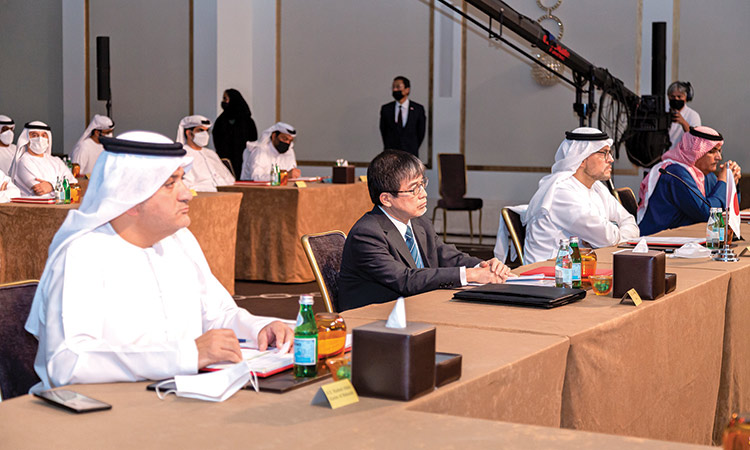 Top officials of the ADDED and JCCME during the 8th session of the Abu Dhabi-Japan Economic Council.

The meeting is aligned with the cooperation framework between the Ministry of Industry and Advanced Technology and its Japanese counterpart to boost potential investment opportunities in the national manufacturing sector.

Dr Al Jaber also showcased the UAE business ecosystem and highlighted its status as a strategic hub for Japanese companies, traders, and investors to invest in the UAE, opening new avenues of Emirati-Japanese collaboration.

UAE-Japan trade at $30.5b in 2021: Mohamed Ali Al Shorafa, Chairman of the Abu Dhabi Department of Economic Development (ADDED), urged Japanese investors and entrepreneurs to benefit from investments opportunities in Abu Dhabi and the suitable business environment to thrive and enhance relations.

Bilateral trade between UAE and Japan reached $30.5 billion last year; UAE exports to Japan rose to $24 billion, while its imports from Japan increased to $6.5 billion by end of 2021.

Addressing the eighth session of the Abu Dhabi-Japan Economic Council (ADJEC), held virtually on Tuesday,  Mohamed Ali Al Shorafa said, “Japan is among Abu Dhabi’s largest trading partners, and Japanese investments are on the rise; more than 340 Japanese companies have their bases in the UAE working in various sectors including infrastructure, industry, and energy”.

“Since the 7th session of ADJEC in October 2020, good progress was made to strengthen cooperation in various areas including Agritech, health services, biomedicine, ICT, financial services, and tourism,” Al Shorafa said.

Al Shorafa reiterated that the government of Abu Dhabi is committed to enhancing the role of private sector in economy, and incentivizing start-ups and SMEs, and the Emirate has outstanding investment opportunities”.

“JCCME has initiated activities and held workshops on water and electricity with Abu Dhabi Department of Energy, Emirates Electricity and Water Co. (EWEC), and TAQA to enhance cooperation in the sector,” Nobuyori Kodaira added.

Shihab Ahmed Alfaheem, UAE ambassador to Japan, said “This session coincides with the the 50th anniversary of the establishment of diplomatic relations between Japan and the UAE. The cooperation between our countries has been diversified further into non-energy sectors, enhancing trade, investments, and business such as renewables, advanced technology and robotics, artificial intelligence, health care, medical equipment and space”.

“UAE is Japan’s 10th largest trading partner globally in 2021 and meets nearly 23% of its total crude oil requirements. The strength of bilateral trade came post-Covid pandemic recovery, and the increase of main traded products such as motor vehicles, machineries and equipment, and aluminum,” Alfaheem added.

“Japan’s FDI stock is estimated over $4 billion in 2021, while UAE’s outward FDI stock in Japan is valued at around $2.1 billion. Although investments by Japanese multinational companies significantly declined, new business perspectives have been developed between two countries such as Japan’s first fuel ammonia cooperation deal with Adnoc,” Alfaheem said.

Isomata Akio, Japan’s Ambassador to UAE said, “The Council has significantly contributed to develop good bilateral relations between Japan and the UAE, and create business opportunities, through active discussion on energy, infrastructure, education and healthcare sector”.

He added that “Innovation and youth education are important keywords for strengthening the bilateral relationship, noting that a joint declaration on the implementation of the comprehensive strategic partnership initiative is being prepared now and will be signed later this year”.

A memorandum of understanding was signed between the Department of Municipalities and Transport (DMT) and Sumitomo Corporation, and joint group discussions focused on key sectors, including sustainable energy, infrastructure, education, and human resources.

It’s time for a better way to communicate at work

AVERTING CLIMATE CRISIS: Private sector should up its hand in eradicating…

‘Pushed to the brink’: Hospo and tourism under pressure in build-up to…

Employment creation potential of industries without smokestacks (IWOSS): A Nigeria…

Analysis | The US and UK Should Be Welcoming Talent, Not Driving It Away

Charging 69 cents for gas was an ‘honest mistake’ he’s…

The S&P 500 Is Missing The Energy Bull Market, Are You?