The Bharatiya Janata Party (BJP) and rivals like the Congress continue to lead the political ad race on Facebook with just a few weeks to go for elections in five states. This may not be surprising but what stood out in all this is the spending by Indian microblogging platform Koo.

Koo spent Rs 18.4 lakh in the last week on what Facebook tags as ads about social issues, elections or politics and over the last 30 days, it spent about Rs 64 lakh on the platform. Between March 2020 and January 2022, Koo spent close to Rs 6 crore on political ads on Facebook.

In the case of political parties, BJP and its affiliates topped the list with spending of Rs 34 lakh in the last one week. The Indian National Congress and its associates spent Rs 35 lakh. Over the last one month, the BJP has spent Rs 1.2 crore and the Congress close to Rs 1 crore.

These are not absolute spends by the political parties, given that there are multiple affiliates spending on various campaigns. For the purpose of this story, Moneycontrol looked at the top five campaigns on Facebook, and also those campaigns that spent over Rs 10,000 with either BJP, Modi or Congress in their names, and in English for the said period. Hence, the actual amount spent by the parties and their affiliates is likely to be higher than presented.

The data was based on the Facebook ad library report that shares the details of ads about social issues, elections or politics on the platform. Social media has become a critical part of the strategies for political parties over the last few years, with the ruling BJP and its rival Congress taking the lead to reach and engage its voters for one key reason—there is no down time.

This is what is reflecting in the increasing ad spends on platforms like Facebook this year, right in the middle of a pandemic. 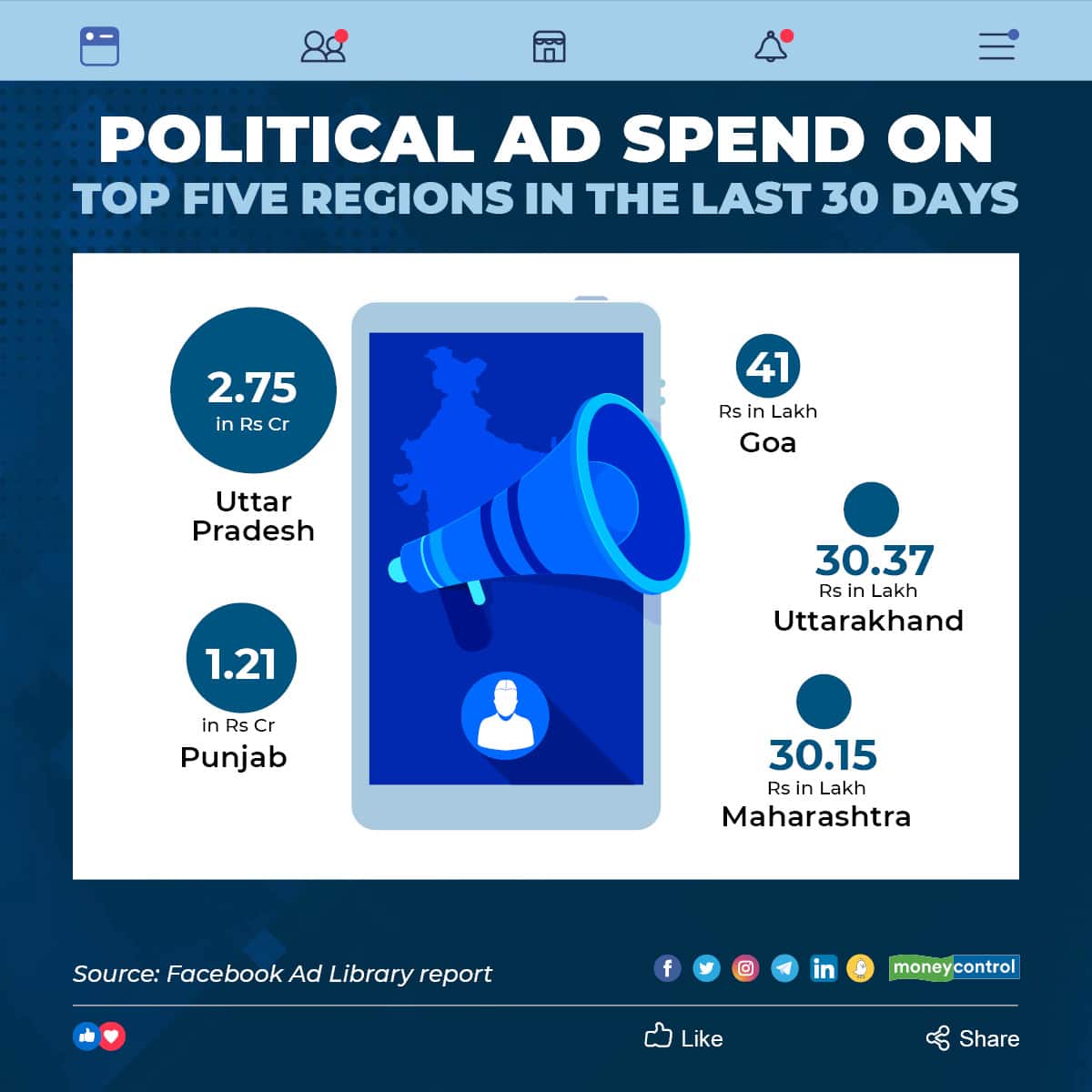 Multiple experts Moneycontrol spoke to said that the amount spent on social media messaging during these elections will probably be even higher, and will be more important this time around, given the curtailment of physical rallies with the new variant of the COVID-19 virus on the rise.

The Election Commission has extended the ban on political rallies till January 31. Karthik Srinivasan, a communication consultant, said, “Political parties will spend substantially more on social media this time than previously because of the constraints due to the pandemic.”

But amid all this, it makes one wonder about Koo’s significant investment on Facebook ads. 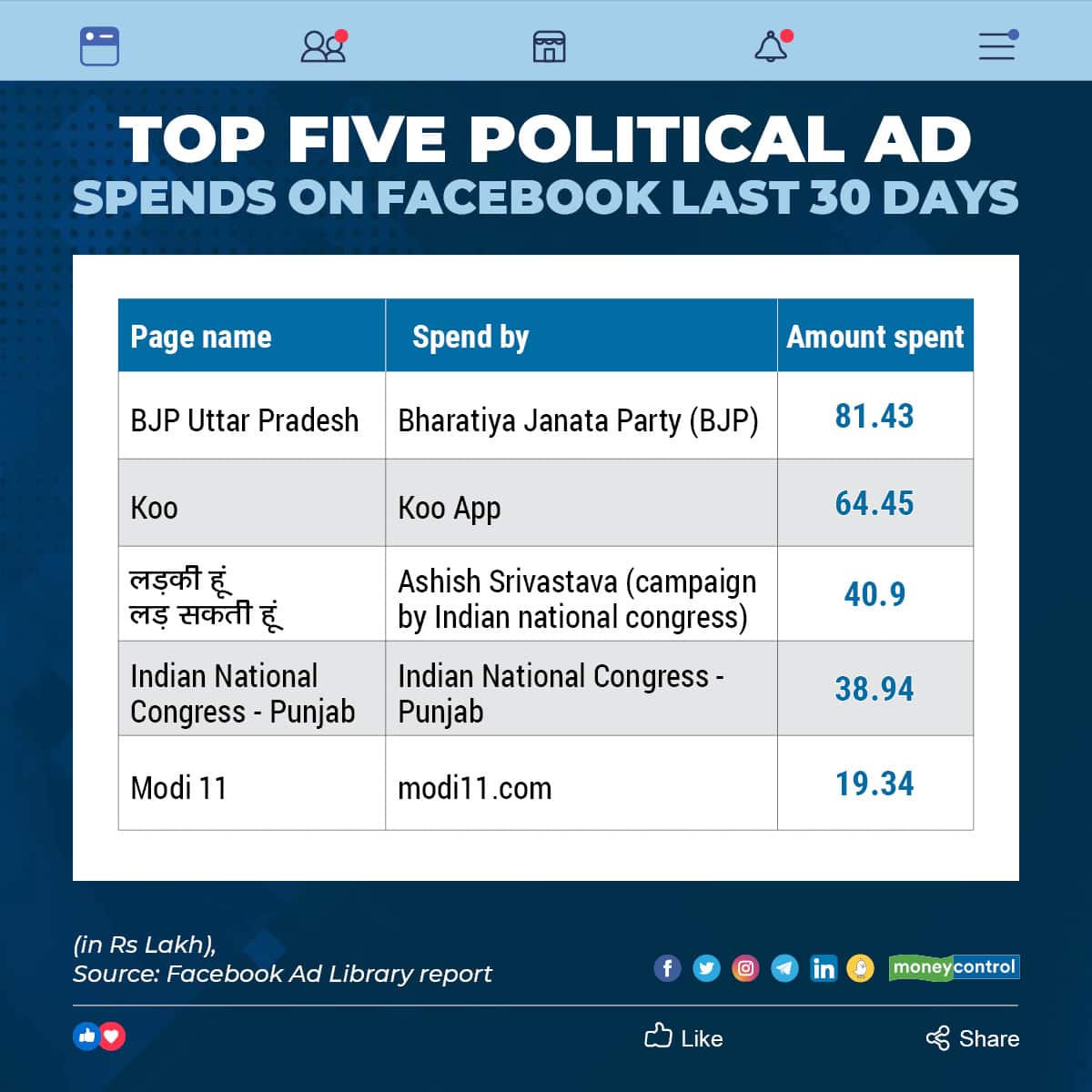 In the list of political ads, Koo was the only firm that featured in the top five consistently amid the political parties. The other two social media/media companies on the top were ShareChat and DailyHunt. ShareChat spent Rs 2.3 lakh and DailyHunt Rs 66,000 over the last one week.

Look at the ads placed by these companies on Facebook.

One of the ads Koo placed on Facebook shows a picture of Union minister Smriti Irani with the tag line in Hindi that translates to: “Follow Smriti Irani on Koo and get special updates”. Similar tags are posted on Koo for other politicians such as Bhupinder Singh Hooda, a Congress politician from Haryana.

On the other hand, DailyHunt’s recent ads were centred on topics such as lockdown information and parliamentary panels. ShareChat had fewer ads, with videos asking that they be shared with family and friends. Many ads were taken down by Facebook since they were against its advertising policies.

Koo, a Twitter clone, was launched in November 2019. It saw its tables turn in February 2021 when downloads saw a significant increase at a time Twitter and the Indian government were at loggerheads over moderation of content.  As the Twitter-government tiff intensified, Koo became a significant gainer with prominent politicians jumping on the bandwagon.

Koo downloads hit 10 million in August and according to reports, they now stand at 20 million.

Srinivasan explained that now Koo wants to model itself as an Indian version of China’s Weibo to move the discussion away from the fact they are a Twitter clone, and focus on the regional audience in the country. Weibo was extremely successful in China for the native population.

During multiple conversations with Moneycontrol earlier, co-founder and CEO Aprameya Radhakrishna shared that Koo’s focus is to attract an audience from the smaller cities and towns, and engage them, whereas Twitter’s users tend to be limited to metros and tier-1 cities.

But here is the challenge. Unlike China, where there are two primary languages (Cantonese and Mandarin) and many dialects, India has 22 official languages and a multitude of dialects. So while the idea of using regional language in the country looks like a good idea on paper, it will be challenging, Srinivasan said.

For Koo to drive growth in these regions, however, elections are the right opportunity and they are simply taking advantage of the situation, said an industry watcher who did not want to be named. Especially if its target audience is in the less-tapped regions that Koo is focusing on.

Prashant Puri, CEO and co-founder, AdLift, a digital marketing firm, said that there are a significant number of smartphone users in India. While Facebook family apps cover a large portion of the audience, there is a lot to tap into for Indian social media users, especially in the tier-2 and3 regions.

“So Koo has a language advantage to get a lot of non-English speakers onto the platform, especially since they are a much smaller platform compared to the other large players,” he added.

The five states going for election alone cover 18 crore voters, with Uttar P radesh being the most populous state in the country.

“So for driving growth, elections could be Koo’s IPL moment to get users in the regional language platforms,” Srinivasan said. The company has partnered with NDTV, Republic and Dainik Jagran for people to key-in to the election.

So why are other platforms not investing?

For one, Koo is fairly new compared to platforms like ShareChat.

Brand consultant Bijoor said, “Koo is a new entrant in the space of microblogging. The brand has a very large space to cover in a very short period of time. So it is important for Koo to become a close number two to Twitter in India for a start. The brand will therefore show a lot of hunger to do this. I believe all this action is a part of that brand hunger.”

“Remember, in the microblogging space, unless you are number one or a close number two, with at least 30 percent market share, you do not count,” he added.

“While apps use entertainment as a fulcrum for ads, Koo uses politics,” Srinivasan explained.

In a statement to Moneycontrol, Koo’s Radhakrishna, said, “Koo is a social network which has Indians discussing over 1000s of various topics—sports, poetry, comedy, culture, arts, history, entertainment, politics, spirituality being just a few of the interests.”

“Like any other startup, we also have multiple acquisition channels to enable people across India and across interest groups to express themselves on the internet. Facebook is just one of such channels and our efforts to educate people about Koo are also across various interests,” he added.

However, if this would actually benefit Koo is yet to be seen.

There are a couple of challenges for Koo here. Bringing the users to Koo is only a first step, it should also retain the people on its platform and that has been a problem for any social media platform, including Koo.

Even if one were to look at politicians on Koo who have a huge following, their main platform to disseminate information continues to be Twitter, and is cross-posted, industry experts pointed out.

Also, Twitter gets a lot of organic growth. “Every day what people say on Twitter, or tweets, makes a story. That cannot be said for Koo. To attract more users, Koo will have to spend a lot of money getting people on its platform,” Srinivasan said.

The best stocks to own when interest rates rise: Morning Brief

A Ponzi scheme by any other name: the bursting of China property bubble

Rees-Mogg: ‘Britain must get every cubic inch of gas out of North Sea’

Spot TV Forecast: After Political Bonanza In ’22, Flat Will Suffice For ’23

Companies use innovation to rise above worker shortage in ag…

Will Cain: This bill would bring more inflation and audits